Understanding the Ubuntu desktop
Initially, you may notice many similarities between Ubuntu and other operating systems such as Microsoft Windows or Mac os x. This is because they are all based on the concept of a [tooltip text=”GUI”]graphical user interface[/tooltip], meaning that you use your mouse to navigate the desktop, open applications, move files, and perform most other tasks. In short, things are visually-oriented.

Ubuntu uses the X Window System, the graphical networking interface found on many Linux distributions that provides the foundation for a wide range of graphical tools and window managers.

Unity and its range of technologies brings simplicity, power, and interaction to both users and application developers. Unity puts design, interaction, and free software at the heart of delivering a powerful and attractive experience.

In Linux distributions (such as Ubuntu), there are a number of desktop environments available. Ubuntu uses Unity as the default desktop environment. After installing and logging in to Ubuntu, you will see the Unity
desktop. This initial view is comprised of the Desktop Background and two bars—one is horizontally located at the top of your desktop and appropriately named the top bar, and the other bar is vertically oriented at the far
left, called the Launcher. 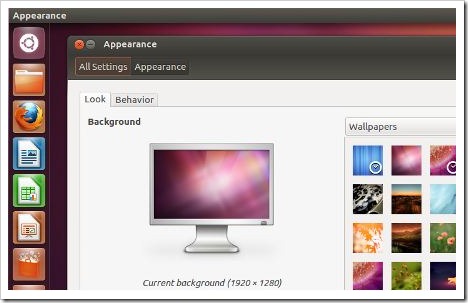