The OpenOffice.org office suite is based on a commercial suite called StarOffice.
Originally developed by a German company, StarOffice was purchased by Sun Microsystems in the United States. One of the biggest complaints about the old StarOffice was that all the component applications were integrated under a StarOffice “desktop” that looked very much like a Microsoft Windows desktop, including a Start button and menus. This meant that to edit a simple document, unneeded applications had to be loaded, making the office suite slow to load, slow to run, and quite demanding on system resources.
After the purchase of StarOffice, Sun Microsystems released a large part of the StarOffice code under the GNU Public License, and development began on what has become OpenOffice.org, which is freely available under the GPL. Sun also continued development on StarOffice. The significant differences between the free and commer-cial versions of the software are that StarOffice provides more fonts and even more import/export file filters than OpenOffice.org (these filters cannot be provided in the GPL version because of licensing restrictions), and StarOffice provides its own rela-tional database, Software AGs Adabas D database.
Sun was bought by Oracle. Oracle recently suffered from a major disagreement with the developer community surrounding OpenOffice.org, and the developers left to form The Document Foundation, hoping that Oracle would eventually join. Because the code for OpenOffice.org was licensed using a free software license, The Document Foundation created a fork, or a new version of the same software, using what they intended as a temporary name, LibreOffice. The hope was merely to change how the project was governed, from being led by one company to being led by a community with many companies and individuals participating. Oracle chose not to join The Document Foundation and instead relicensed the OpenOffice.org code for all future versions, which they may do as the owners of that code, and gave the code to the Apache Software Foundation, who is licensing it under the less-restrictive Apache license that allows open-source code to be used in proprietary products. To make things more interesting, IBM is using this Apache-licensed version of OpenOffice.org as the founda-tion for its own free-as-in-cost office suite based on it called Lotus Symphony, which also has some proprietary additions.
As the saga continues, the ultimate winner may be the end user, as this effectively cre-ates three competing office suites. For now, LibreOffice has the most developers, the strongest community, and the most mature software with the most rapid addition of new or improved features.

LibreOffice contains a number of productivity applications for use in creating text documents, preparing spreadsheets, organizing presentations, managing projects, and so on. 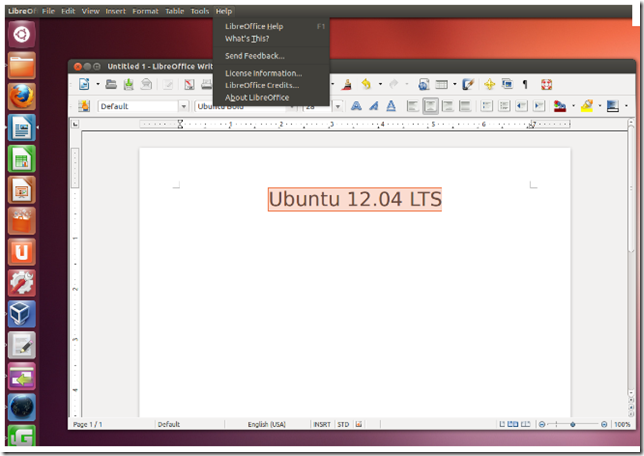 The following components of the LibreOffice package are included with Ubuntu:

. Writer—This word processing program enables you to compose, format, and organize text documents. If you are accustomed to using Microsoft Word, the functionality of LibreOffice Writer will be familiar to you.
. Calc—This spreadsheet program enables you to manipulate numbers in a spread-sheet format. Support for all but the most esoteric Microsoft Excel functions means
that trading spreadsheets with Excel users should be successful. Calc offers some
limited compatibility with Excel macros, but those macros generally have to be
rewritten.
. Impress—This presentation program is similar to Microsoft PowerPoint and enables
you to create slideshow presentations that include graphs, diagrams, and other
graphics. Impress also works well with most PowerPoint files.

The following five applications are not included by default with Ubuntu, but are quite useful. All but Dia are a part of the LibreOffice project and add features to the suite that are not used as often as those Ubuntu installs by default. You must install them from the Ubuntu repositories if you want or require their functionality.

. Math—This math formula editor enables you to write mathematical formulas with a number of math fonts and symbols for inclusion in a word processing document. Such symbols are highly specialized and not easily included in the basic functionality of a word processor. This is of interest primarily to math and science writers, but Math can be useful to anyone who needs to include a complex formula in text.

. Base—This is a fully functional database application.
. Draw—This graphics application allows you to create images for inclusion in the documents produced with LibreOffice. It saves files only in LibreOffice format, but it can import most common image formats.
. Dia—This technical drawing editor from the GNOME Office suite enables you to create measured drawings, such as those used by architects and engineers. Its functionality is similar to that of Microsoft Visio.
. Planner—You can use this project management application for project planning, scheduling, and tracking; this application is similar to, but not compatible with, Microsoft Project. Once installed, you will find it under the name project Management.

LibreOffice is Preinstalled on Ubuntu 12.04 , Starting with Ubuntu 11.04, LibreOffice is part of Ubuntu. Since LibreOffice is already part of the standard packages, just search for “libreoffice” in your favorite package manager. To find out which LibreOffice version ships with a specific Ubuntu version

1 thought on “A Brief History of LibreOffice”